Nearly all types of swords offered in our collection are hand forged like the originals. Made from high carbon steels and other authentic materials, these blades handle and flex like real things. The fully tempered, full tang blades are battle ready swords all set for your next crusade or just display ready for your office or den. Know what it was like to hold the weapons that carved out the world's greatest nations!
Explore our collection now!

Atlanta Cutlery Atlanta Cutlery offers military dress sabers and military swords manufactured according to exact government specifications. We have proudly supplied military officer swords and sabers for the Marines, The Citadel, Marion Military Institute, Fork Union Military Academy and other academies around the country: we deliver the very best.

We also offer custom engraving on our dress swords and sabers. Wondering what size of  Military Sword Should I Carry and Why?

Watch this video on The Creation of Swords 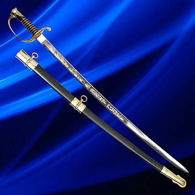 A historical sword was a symbol of bravery and prestige. Not just anyone could have one. They were earned and with them came respect. Swords literally carved out kingdoms throughout history. Tough, functional, and effective in hand-to-hand combat, they were the choice of royalty, knights, men-at-arms, and peasants alike.

Many use the term “battle-ready swords,” but what does that mean exactly? Essentially, they are hand-forged, fully functional blades made of high-carbon steel that can perform like the originals. Unlike stainless steel, this can be too brittle to handle a true battle situation. Historical swords can be used in training and live reenactments. Use common sense though, if bashing edge-to-edge. Use the right tool – a theatrical blade with rounded edges and tip. Historical swords are the kind of blades used in medieval and Renaissance fairs, Civil War reenactments and shows for fencing and simulated battles. High-carbon spring steel is generally the strongest material used in blade making and we feature 1065-1095 on our site. It is the steel of choice for battle-ready swords, which can then be hand forged and tempered. We offer a good selection of historically accurate functional blades from the US Revolutionary War and Civil War to more current military offerings. To hold a functional full-tang blade is to come face to face with history. They look like the originals, were made like them, and flex and balance like their historic counterparts.

Products featured on Atlanta Cutlery and its sister website Museum Replicas include historical swords from the ancient Greek, Rome, Viking, Medieval and the Renaissance periods up to the American Civil War. Fancy yourself a Musketeer or knight errant? How about a Spanish conquistador or marauding Viking? Maybe a Roman Centurion? One hand, two hand, bastards, rapiers, and cut-and-thrust were all choices men made when conflict loomed. You’ll find what you need for your persona, collection, or reenactment. Made from originals when possible, we’ve captured the little details for authenticity and maybe, more importantly, the function these blades were meant for. 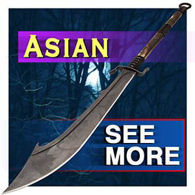 You cannot talk about Japanese history without mentioning the elite Samurai Warrior and the real samurai swords. Experts at fighting both on horseback and the ground, the Samurai lived by a strict code of ethics. Instilled with "freedom from fear", they trained rigidly and were considered an aristocratic warrior class.

Just like the warriors, their Japanese Samurai swords also has a rich history associated with them. There is nothing like holding a Japanese sword for the very first time.

A true katana sword was the primary weapon carried by the Samurai of Feudal Japan. These single edge curved katana blades are worn with the blade pointing up, allowing these types of Japanese swords for a smooth drawing of the sword and attacking in a single motion.

Atlanta Cutlery carries a range of quality katana for sale, samurai weapons for sale, and wakizashi sword for sale. 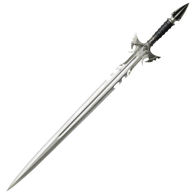 Fantasy swords and fantasy weapons are your standard weapons taken up a notch. So much so, many are considered works of art or metal sculpture. Pop culture has helped greatly fuel these amazing pieces. Inspiration is taken from the works of JRR Tolkien, Robert Jordan, Brent Weeks, RR Martin, Frank Frazetta, Edgar Rice Burroughs and more contemporary designers like Kit Rae and our own design team. The Lord of the Rings and Hobbit, Highlander, Last Samurai, Walking Dead and so many others feature fantasy versions of swords which have inspired so many artists. Myth and legend have their place also with the likes of Excalibur, Kusanagi, Wonder Woman, Robin Hood, Princess Bride Inigo and the Dread Pirate Roberts, Durandal, Three Musketeers, Don Quiote, Chronicles of Narnia, John Carter of Mars, and Kingdom of Heaven.

They start in reality and quickly become a work of art in the right hands. Our fantasy swords call on elves, orcs, ogres, dragons plus great warriors, mythical kings to capture the fierce, passionate nature of these beings.

Collecting these spectacular swords has grown over the years and if you want sci-fi, legendary, horror, or even gothic swords Atlanta Cutlery (ACC) is your source. We sell many different brands of fantasy swords, ranging from makers such as Kit Rae, United Cutlery, Master Cutlery, JALIC and Windlass Steelcrafts.

We feature items from Assassin’s Creed, Game of Thrones, Walking Dead, Hobbit, Conan, Death Dealer, The Vikings, 47 Ronin, King Arthur and his knights of the round table and others. Often made from high grade stainless steel or high carbon steel with metal fittings and leather and wood accents, they employ many of the same materials as their historical counterparts. They are in many cases not only beautiful, but fully functional works of art. 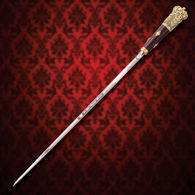 What is better than a simple walking cane? Canes with swords! Sword canes have been used throughout history and are often featured in TV and movies by villains and heroes alike. Dr. Watson carries one in the latest incarnation of Sherlock Holmes to hit the screens. Batman Begins features one. Even frontier gamblers and many others carried these tools discretely. Although laws vary and may make them tough to carry they are still wonderful curiosities to own.

The sword cane or stick as it was first known was a popular fashion accessory for the wealthy during the 18th and 19th centuries. They varied in size of blade and decoration from short stabbing blades to rapier size swords. However during this period, it was becoming unacceptable in social settings to openly carry a sword, even though there were still aristocrats routinely trained in the gentlemanly art of swordsmanship and dueling who wished to go armed for self-defense. Rarer were swords concealed in ladies' walking sticks and parasols, as it was even less socially acceptable for a lady to carry a sword, or gasp, publicly admit that she knew how to use one!

Soon after their introduction, other items found their way into canes and became popular. Instead of a blade, these could hold telescopes, compasses, flasks known as tippling sticks for alcohol and even lock pick sets. There were even some with guns which proved impractical.

Today’s sword canes are elegant, functional and can save your life if need be. There is a confidence that comes from having a good blade at your side and we have many to choose from. From Victorian era London and Jules Verne to modern day designs and materials like high carbon steel and aluminum you’ll find that perfect accent to your historical outfit or daily carry. 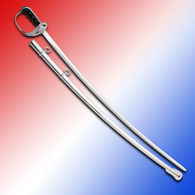 Training swords and sabers are quite possibly the most valuable of any you may own. They allow you to practice sparring and light combat safely, either by yourself or with others. You’ll find live steel to be a dangerous alternative, and training partners may be tough to come by when you’re always putting them in the hospital. Stuntmen and women train with them for months ahead of shooting, and both Western and Eastern martial artists use them for katas and dueling.

Best training swords have a realistic feel, balance, and weight of the real thing. They can feature alternate materials like rubber, plastic, polypropylene, aluminum, latex and wood. They can also be steel. But whatever the choice of material, the most important features are the strong handles and full tangs, plus the additional safety of thick blades, blunt tips, and rolled edges. 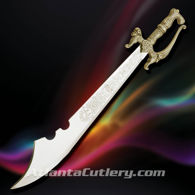 We've made it easy to decorate your home or dress for an event like a wedding or party. Forged by expert hands using state-of-the-art technology, we leave no stone unturned to provide you with the very best! Decorative swords make for excellent wall decor and displays, add something extra to any historical costume or sword collection and are great conversation pieces.

*By signing up you agree to receive emails with Atlanta Cutlery Corp., special offers, promotions and messages tailored to your interests. Offer valid only for new sign-ups. You can unsubscribe at any time. See Privacy Policy for more information.
By continuing to this site, you agree to the storing of Cookies on your device to enhance site navigation, analyze site usage, and assist in our marketing efforts.
X